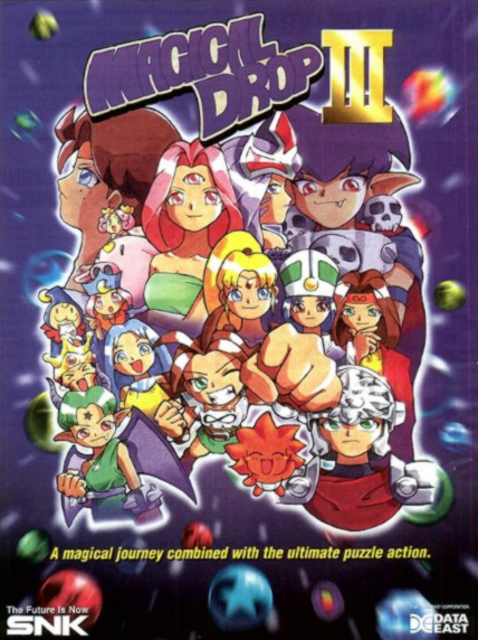 The definitive installment of the Magical Drop series doubles the roster from the previous game while adding difficulty settings, a new single-player game mode, and dedicated attack patterns for all characters. It is also the last arcade game developed by Data East.

The third installment in the Magical Drop series, Magical Drop III nearly doubles the roster of its predecessor, complete with a new assortment of secret characters, while adding unique attack patterns for all characters in Versus Mode. It also adds difficulty settings for all game modes (including a new single-player board game-based Adventure Mode) and a new button (which is now used to add more bubbles to the player's own playfield to speed up the game). It is the last arcade release of the series and the last arcade game developed by Data East.

It was later released in Japan for the Neo Geo AES system in April 25, 1997, and received ports in Japan for the Sega Saturn in June 20, 1997 and Sony PlayStation in October 30, 1997. The PS1 version was later repackaged with an authentic port of Magical Drop Plus 1! as Magical Drop III + Wonderful! in February 25, 1999, which was localized as Magical Drop III in Europe (and released by Swing! in July 23, 2000). The game would also be ported to the Game Boy Color outside of Japan by Conspiracy Entertainment and released by Classified on October 18, 2000.

In 2010 a port of the game was developed by Onan Games and published by G-mode for Zeebo.

The gameplay is simple: You press A to collect "drops" of the same color, and press B to release them. Match three or more of the same color to pop them and send more over to your opponent. The player can also press the C button to make more drops appear on your own side, in order to perform faster and longer comboes. The first to have their drops touch the bottom of the screen loses, although players can also win by fulfilling a quota listed in the middle of the screen. There are a number of characters to select from, based off of the 22 Tarot figure cards, and four basic types of drops to pop again based on the four "suits" of tarot (the stave, the sword, the cup, and the coin, in this case appearing as stars.)

Each character has a different pattern which appears on your opponent's side in versus or challenge mode. In addition, each character has a different "attack" pattern which occurs when you clear a sequential number of drops. For example, Fool pushes all drops down evenly as an "attack", whereas Death and Tower push drops down on either side of the opponent's playing area. Some characters also generate ice blocks with a higher frequency (ex., Empress) or require less in the way of combos to push the opponent's side down (Tower).

The game takes place in "Magical Land", where the various characters are competing over a jar of magical drops which is rumoured to grant wishes. Each character makes a different (generally silly) wish in their ending (For example, Judgement wishes to be a boy, but then is horrified when she appears in a bath house and Emperor comes on to "him")

Special Drops: In addition to the four basic drop types, there are a number of special drops. Three special drops: the suit drops, the ice drops, and the rainbow drops appear in versus mode. All others appear exclusively in the other modes of play.